Ethnic Online is proud to introduce MS Kennedy Campbell the Founder and President of Arts for Anxiety Inc., a nonprofit organization designed to bring awareness and assistance to those who suffer from anxiety and other mental health issues by the relief that can be found through the Arts.

When asked why she started the Arts for Anxiety Inc. Kennedy said, “I wanted to help people who suffer from anxiety and depression, so they know that they don’t have to struggle alone, and people understand and want to help”. Kennedy, who has been diagnosed with selective mutism which is “a disorder that manifests in children and is classified under a severe anxiety disorder that is characterized by the inability to speak and communicate in certain social settings, like school. Selective Mutism occurs when a child is experiencing severe anxiety in a social situation”

Kennedy is not new to the scene, she moved from Long Island, New York with her family to Massachusetts in 2015 and has been featured on NBC, CBS and other national media outlets concerning her work for anxiety. She partners with the Anxiety and Depression Association of America to bring her message to youth. She is a children’s book author and singer songwriter, in her sophomore year at Syracuse University. Kennedy has written several books and songs addressing anxiety, depression and other issues.

Her work through this organization gives her the opportunity to highlight this growing health crisis facing youth today by performing for organization such as the Boston Children’s Hospital and Veterans Affairs medical facilities. Her latest projects include the release of a Black Lives Matter original song and video entitled, “I Am America” intended to bring awareness and unity at this time of division in our Nation. Kennedy made it very clear that “I chose this profession because I want to use my voice to make a difference in the world.” (she thanks her mentor Rebecca Karpoff her singing coach who has helped her change her voice in way that she never thought she could). 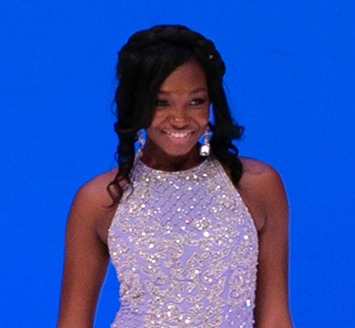 Kennedy serves as an Advisory Board Member at Wheelock Family Theatre Youth and she’s a former member of Jack and Jill of America. If you are aware of Jack and Jill, then you know Kennedy was groomed from a youth to be great! When not making a direct difference in the lives of those who suffer from Anxiety, you can find her enjoying a number of her favorite hobbies such as archery, horseback riding and acrobatics. She has also written a children’s book series for her foundation about using the arts to overcome anxiety.

We openly discussed life five years from now and Kennedy said “I hope my foundation is flourishing and I am working on Broadway. I have won several scholarships and awards for my music and singing including a national award for my Black Lives Matter song and video.” Kennedy also adds that “she wants to be an EGOT winner which is an Emmy Grammy, Oscar and Tony!”

Selective Mutism is a serious issue facing many youth and teens in America. In 2020, the CDC reported that approximately 4.4 million children between the ages of 3 and 17 have been diagnosed with anxiety. Studies have shown that art therapy and other art forms are effective ways to help with anxiety. Through Kennedy’s efforts at the Arts & Anxiety Foundation, they are being beautifully addressed!

For more information on Kennedy and her organization Arts for Anxiety, please visit the website at www.artsforanxiety.com

No comments to show.

A Magazine for and about Ethnic Professionals in the New England area.

Our readers are guaranteed to be motivated, inspired, and educated by the various articles on Health, Finance, Fashion etc.