Actor, writer, director Michael Jai White and his team of award-winning industry veterans are launching JAIGANTIC STUDIOS (a clever play on his middle name, which is JAI – JAIGANTIC Studios), the first mini-major studio in Connecticut. Fulfilling a lifelong promise of returning to his home state to anchor his studio and expand the industry, White will be providing thousands of job opportunities, professional training, apprenticeships, and community development projects under the mandate of uplifting the communities who supported him along his journey.

Part of his veteran team includes Michael’s Southern Connecticut State University running buddy, Jackie Buster, Founder & Chief Executive Officer at WOW! Creative Design Group – based in New Haven, Connecticut. With over 30 years of industry experience combined with passion, this is a match made in heaven. Jackie’s mission has always been to “help grow what our clients have planted, providing strategy & tools that empower organizations to thrive in their areas of expertise.” Jackie will serve as Chief Impact Officer (CIO) for JAIGANTIC Studios, a senior leadership position reporting to the CEO. In this role, Jackie will provide strategic leadership, management, and guidance to the company’s executive team and guides Jaiganitic Studio’s overarching mission to create developmental opportunities through community engagement, education, and training programs. Jackie will also support investor, governmental, and community relations and new business acquisitions to cultivate successful outcomes for the company – its employees and stakeholders. A huge undertaking, but Jackie is poised and ready to take control! When asked about the future of WOW, Jackie indicated that “WOW is not going away, but will focus on special projects moving forward.” 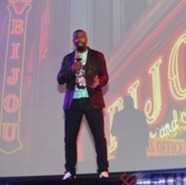 In July of this year, JAIGANTIC will be opening “Studio One” its first production facility in Fairfield County to operate out of during construction of their purpose-built studio complex in New Haven, Connecticut. Studio One will be utilized for JAIGANTIC’s slate of productions as well as servicing outside film, television, and commercial projects.

When finished, JAIGANTIC STUDIOS New Haven will house several state-of-the-art soundstages, production offices, post and support facilities, and first-in-the-northeast 360-degree virtual production volumes with companion motion-capture stages. Worth noting: Tyler Perry’s Studios in Atlanta is the only other fully Black-Owned studio that can make this claim! This is monumental.

JAIGANTIC STUDIOS will solidify New Haven as a viable alternative to the primary entertainment markets by leveraging the state of Connecticut’s robust film and television tax incentive programs with the tri-states extensive talent pool, innovative technology, and turnkey production facilities, which, combined, will position JAIGANTIC STUDIOS as a significant competitor in the studio sound stage market.

JAIGANTIC STUDIOS is strategically located at the midway point between New York and Boston, the two largest entertainment industry hubs in the Northeastern United States. Known as “The Cultural Capital of Connecticut,” a leader in the state’s “Startup & Innovation Culture” and home to Yale University and its world-renowned drama school, JAIGANTIC STUDIOS, and the City of New Haven is perfectly positioned to support and sustain the emerging film industry.

As an actor and world champion martial artist, Michael Jai White has entertained the masses and achieved global success with titles celebrated worldwide. With a dedicated fan base in the tens of millions worldwide and over 100 films and TV series under his belt, White has grossed billions of revenues for those invested in his work. He is the first black actor to portray a comic book superhero in a major motion picture, having starred as Al Simmons, the protagonist in the film “Spawn.” White also portrayed Jax Briggs in “Mortal Kombat: Legacy,” as well as DC Comics superhero Bronze Tiger in the “Arrow” series and boxer Mike Tyson in the HBO movie “Tyson.”

As a studio owner, producer, and director, White has set his focus on producing original projects, including the action drama “Crossroads Cafe” and the highly anticipated sequel to “Black Dynamite”; all written and directed by White and slated for production this year.

The first production completed under JAIGANTIC, the comedy western feature film “The Outlaw Johnny Black,” is currently in post-production and scheduled for release on Thanksgiving 2021. I was fortunate enough to be at the screening alongside other Connecticut notables like Howard K. Hill, NAACP State President Scott Xdale, Bridgeport Mayor Ganin, Carolyn Vermont and Kay of Kay Hair Studios, and many others.

Stay tuned Northeast, Hollywood, and the rest of the world; JAIGANTIC STUDIOS has arrived!

No comments to show.

A Magazine for and about Ethnic Professionals in the New England area.

Our readers are guaranteed to be motivated, inspired, and educated by the various articles on Health, Finance, Fashion etc.